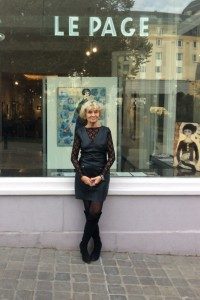 Annik Le Page’s work has always been closely linked to the female cause. The beauty and grace of her subjects are evident yet one senses a certain restraint. Le Page looks to represent women who advance themselves through means other than their physical attributes. Using traditional oil paint combined with mortar (sand), her technique conveys a sense of serenity and strength in a Modern World. This results in a total mastery of her craft.

“I immediately felt painting to be the direct transcription of the inner to the outer, from the unconscious to reality” she said. To the question as to why there are only women in her paintings she replied “ Because I have cast myself into my art, but also because in Contemporary Art, women have changed place, position and status”. Her portraits represent this new woman caught between two contradictions: her feminity and her paradoxal refusal to charm.

She was also a French television scriptwriter for fifteen years.

Annik Le Page is a member of The Society of Authors and Playwriters.

She is a board member of the Society of Independent Artists and a regular contributor to their annual exhibitions.

She was awarded the Silver Medal of Merit in recognition of her contribution to French Art.

Institutions and professionals of the Contemporary Art World have broadly welcomed her exceptional creations. She has built a solid reputation globally in top galleries through permanent exhibitions dedicated to her.

She is present in many private collections in the United States, England, Holland, Belgium, Lebanon, Germany, Switzerland and France.

“ They were no artists in my family: all military (my grand father a marine officer, my great grand father a general and minister of war, judges, and doctors. All educated people who looked down at artists as “entertainers and performers”. In short they did not encourage us to go in that direction! By reaction, of course I became interested, from adolescence to all forms of Art.

I liked to walk to the Louvre museum in Paris and trailed round the halls filled with paintings. I also loved Archeology and Greek statues. My enthusiasm for the theater brought me to present myself and sit for the entrance exams to the Paris Conservatory as a student actress. I did some acting for a while but my passion remained Literature.

Therefore I followed a university course and got a Master’s degree in Modern Literature (my master’s thesis was on Claude SIMON who became much later a Nobel price laureate.)

I then had the opportunity, thanks to my husband Christian Waton, screenwriter and writer (350 TV Movies and cinema + 7 Novels published by Julliard Editors, Oscar nominated for “Le Maître de musique”) to write for the French Television from 1982 to 1993.”

*Portrait of a young woman upside down (with Nathalie Baye) on TF1 channel.

*The Art of the fugue on FR3 channel.

*I am in Rio do not expect to dine on TF1 channel (with Marie Christine Barrault and Patrick Chesnais).

“I did not want to stop there and I wanted to explore other artistic fields. It was too late to start with Music but not with Arts!

My encounter with Waltraud Solonet the last disciple of Oskar Kokoshka in Vienna was a determining factor.

I enrolled in her courses: her speciality was to use all kinds of materials and divert them from their original function (mortar, candles, paint for walls etc…)

This original approach of Graphic arts seduced me immediately. I wanted to try it out. I exhibited at the “Salon des Independants” (created by the Impressionists) which I became a member of the board and at the “Salon d’Automne” in Paris and “the Contemporary Art Fair” of the Bastille area also in Paris.

This is when the galleries came to me: London, Brussels, Geneva … and St Paul De Vence in France (where Chagall lived from 1966). I met Geraldine Dunoyer Montero who ran her gallery with great panache and skill. This was the beginning of a collaboration between us as successful and friendly.

Why women? A statement of my own nature while defining the way of representing and giving the place that I give to women in this world so different from my artistic universe.

Fashion has always fascinated me: its multiple facets and aspect are endless and inexhaustible. And there is something touching in this fashion propensity or tendency to try to erase the triviality of things by building a sophisticated universe a second skin somehow. The garnment is a state of mind and contrary to what is said: ” clothes make the man”.

Then there are tigers: a personal attraction. I paint them as animals that protect you, almost domesticated; their dangerousness erased by the presence of the woman who tamed them: perhaps a parable .It was often pointed out to me that there were no men in my paintings.

Perhaps these tigers both dangerous and harmless are the synthesis of the relationship between men and women, in which each one has kept his specificity and caracter.

From writing (I was painting with words at that time) I arrived to painting and from Paris, London, Brussels, Geneva, I came to show my paintings here in Dubai for this special exhibition “Women from here and elsewhere” celebrating the International women’s day…”